You Need To Know

The testes have been identified as the most distinct type of human tissue by the Royal Institute of Technology in Sweden.

The team have detailed which proteins are active in which tissues of the human body.

It shows the testes needed the most distinct suite of proteins to function.

The Human Protein Atlas has been described as a “really important foundation” for scientific research that could help develop new drugs.

Human DNA contains the instructions for building about 20,000 proteins – the little bits of biological machinery that run our body.

The combination of proteins active in a cell decides its function – a cell for filtering the blood in the kidney works differently to a neuron in the brain.

Scientists have now pieced together which proteins function where and hope the findings could have important implications for medicine.

“Surprisingly for us, there is altogether very little proteins which are enriched in the different parts of the human body and almost half of the 20,000 genes are coding for proteins which are expressed in all cells and tissues of the body,” Prof Mathias Uhlen, the project leader, said.

These are described as “housekeeping” proteins necessary to keep every cell functioning.

But 999 proteins were significantly more active in testicular tissue than anywhere else in the body. 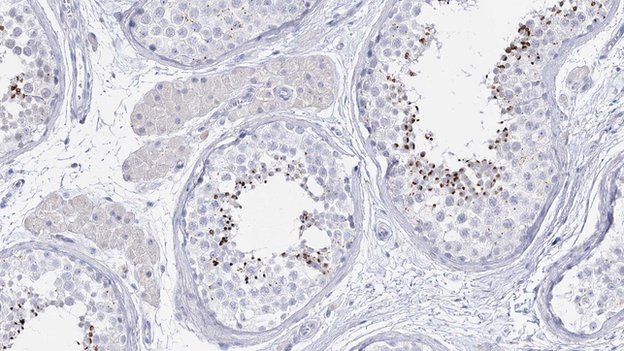 The cerebral cortex of the brain had 318, the liver 172 and smooth muscle zero.

Prof Uhlen told the BBC News website: “If you’re interested in the brain or neurological disorders or even degenerative diseases like Alzheimer’s obviously it is interesting to know which proteins are elevated in the brain.”

He speculated the testes were unique because of the complicated method of producing sperm, which need to have half as much DNA as a normal cell.

“Also there are about 600 proteins which are targets for all the pharmaceutical drugs, so you can say where are these targets located in the human body because that gives you indications about side effects.”

The team used antibodies designed to latch on to different proteins.

They then exposed 32 types of tissue – representing all the major organs and tissues in the body – to the antibodies to see which ones stuck and therefore which proteins were active.

The team aim to develop a “pathology atlas” that will show what goes wrong during disease and which proteins are involved.

Dr Ewan Birney, the associate director of the EMBL-European Bioinformatics Institute, said the project would complement the rapid advances in understanding DNA.

He told the BBC: “It’s looking great – it’s going to be a really important foundational resource on top of the bedrock of the Human Genome Project.

“It is going to accelerate both basic and clinical research. It’s much closer to the action than genomes.

“About half of proteins we’re really head-scratching about what they do… [now there are] proteins we know exist, we know they do something, but now we know where to look.”

He argued the testes had more distinctive proteins because of their focus on producing large numbers of sperm without any errors in their genetic code.

Mutations in a normal cell may eventually lead to cancer. However, a mutation in sperm could stop it being able to fertilise an egg, he said.

Meanwhile, the unique brain proteins may be down to a “sheer logistics problem” involved in operating really long nerve cells stretching across the brain, he argued.

Work has begun on demolishing redundant buildings at a Hampshire Army

He is the most notorious of traitors to the British Crown. Who now

Papers back the government's decision to bring the army's auditing

An underwater tunnel linking Wales to Ireland should be seriously

Samsung Electronics has announced plans to spend up to $3bn (£1.8bn)